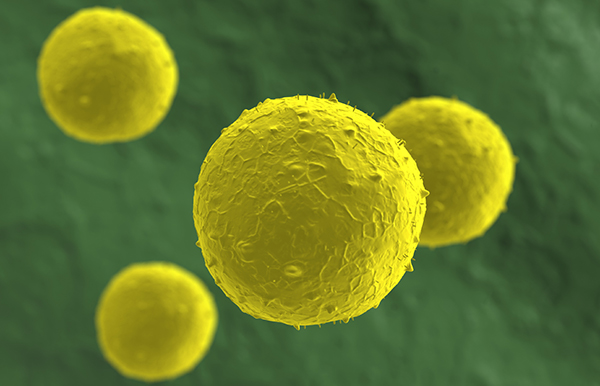 In mammals, the first line of protection against RNA viruses like SARS-CoV-2, the cause of COVID-19, is a cellular defense mechanism known as the interferon response. But stem cells lack the ability to mount that response against RNA viruses, leaving them seemingly unprotected. Researchers from the Francis Crick Institute have discovered a way in which stem cells fend off RNA viruses, and it’s similar to how plants and insects safeguard themselves.

The Crick team discovered that mouse stem cells contain instructions to build a protein, dubbed antiviral Dicer (aviD). The protein slices viral RNA, which prevents RNA viruses from replicating. Essentially, this is RNA interference (RNAi), the same protection method used by cells in plants and invertebrates. They believe their insights could inform efforts to develop new therapies for COVID-19 and other infectious diseases.

In the study, published today in Science, the researchers exposed engineered human cells to the virus that causes COVID-19. When aviD was present in the cells, the virus infected three times fewer stem cells than those without the protein.

The researchers went on to create mini brain organoids from mouse embryonic stem cells to see how aviD would protect them from the Zika virus. The organoids with aviD grew more quickly and produced less viral material than those without the protein. The team demonstrated a similar effectiveness against SARS-CoV-2.

“The fact this protection is also what plants and invertebrates use suggests it might be something that goes far back in mammalian history, right up to when the evolutionary tree split,” said Caetano Reis e Sousa, co-author and group leader of the immunobiology lab at Crick, in a statement. “For some reason, while all mammalian cells possess the innate ability to trigger this process, it seems to only be relied upon by stem cells,”

The Crick Institute research is among several efforts currently underway looking at RNA interference as a therapeutic pathway in several diseases.

Gene-silencing specialist Sirnaomics has several RNAi drug candidates in the works and gained FDA approval Tuesday to start a phase 1 clinical trial of its small interfering RNA hopeful STP707 for patients with solid tumors. The company is in early clinical trials in solid liver tumors, squamous cell carcinoma and basal cell carcinoma, and it raised $105 million last week to support its R&D efforts.

Alnylam Pharmaceuticals and Vir Biotechnology teamed up last March to develop an RNAi therapeutic (PDF) to tackle COVID-19. The companies initially said they hoped to begin trials of the antiviral, VIR-2703 by the end of 2020. But earlier this year, VIR-2703 came off of Vir’s pipeline list and spokespeople for both companies acknowledged in press reports that it was no longer a research priority.

The Crick’s Poirier said it “remains a mystery” why stem cells use aviD as a defense. One potential reason is that the interferon process could harm stem cells, so mammals might have developed an alternative to prevent that. He and Enzo Poirier, author and postdoc in the Crick lab, will continue their research by creating a mouse model to further study the aviD’s impact and importance in mammalian stem cells.

Breaking in a new planet